If you know me, you know I like a plan. I make lists, I like details, I need a plan b, just in case. In our team of photography, I am by far the planner. After meeting with Spencer a few weeks prior to the big surprise, in true Ayn fashion, I decided I needed a plan. Here's what we were up to! 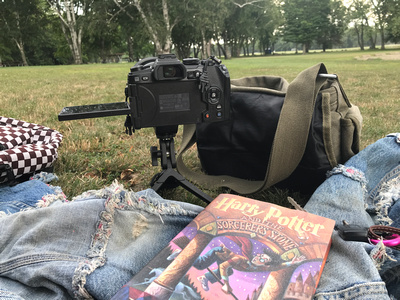 Spencer was getting ready to propose to his girlfriend and asked us to capture the surprise. With some brainstorming, the location was decided and the plan was in progress. I knew what he was going to be wearing, roughly where he was going to be and we planned for me to look like I was hanging at the park, reading a book and just so happened to have a camera. The plan was perfect, I felt great and then I left to go shoot and thats when things started to twist.

The sunny, blue skies started to collapse into itself and the grey clouds started to pile in. Distant sounds of thunder echoed as I unpacked the equipment from the car and got my camera all set up. From all conversation that I had, I thought I was where I needed to be, Spencer and Alyssa would come up to those benches and I would be there. A quick text to let Spencer know I was ready and things would start to unfold. I felt like a camera ninja, I was so excited to be apart of such a beautiful moment and get to sneak around a bit. With a reply back of "I don't see you", my heart started to beat faster. Was I going to miss this moment?  Would she catch on and me not being ready ruin the surprise? I couldn't see them, I kept scanning the park and nothing. With a moment of decisive decision making, I decided to throw my plan(s) in the wind. I needed to start moving, I needed to find them, I need Spencer to see me but Alyssa to not. 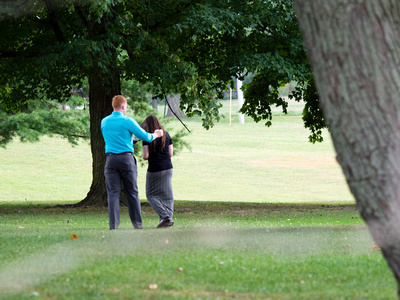 From a football field away, I saw that teal shirt. Thank god, we planned that!! I caught Spencer's eye and the plan was back on track.

Tucked around landscaping, I watched in silence. Excited and ready, Spencer was about to make his girl's day, in the pouring rain. As I snuck up to a closer spot, Spencer gave her a handwritten note and turned her away from him. It felt like I was at the movies, just waiting for the climatic moment. Looking at him, he was calm and collected, a man who knew in his heart that she was his person. His happily ever after. 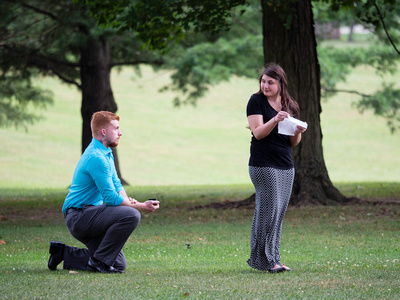 Minutes went by as Alyssa read her note and Spencer dropped to his knee. At the bottom of the note, Spencer wrote "Turn Around" and as she slowly turned, you could see how surprised she was. It made my heart just melt, watching such a vulnerable moment for the both of them gave me the chills. This is their beginning, their real beginning. August 2nd, 2017 was the day that these two began their journey to becoming one. I look forward to see what unfolds for these two, for future times that we will work together in their wedding process. I want to thank Spencer for having Sethington's Creations be your photographer for such a monumental point in your life. Here's to many more great momories to come for you two, Spencer and Alyssa. 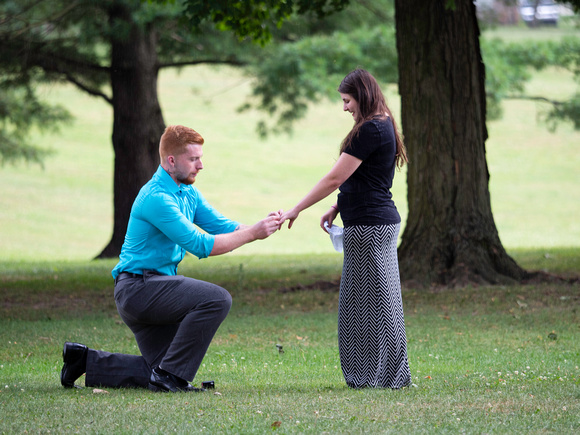